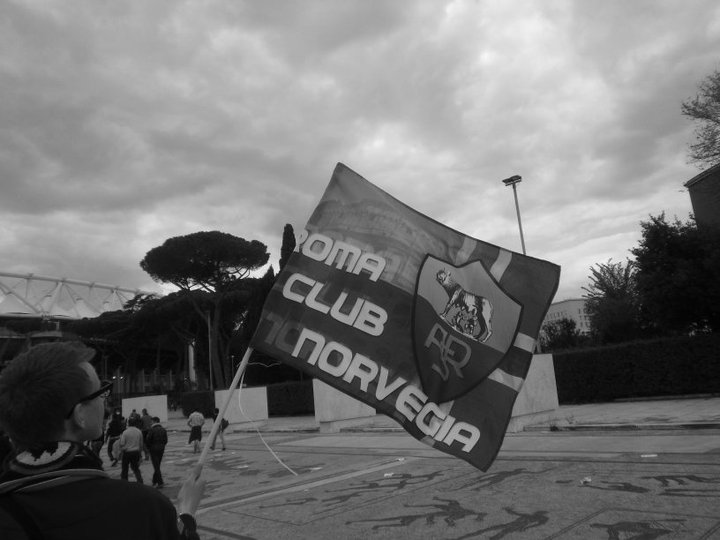 Millions of people visit Rome every year, but the vast majority of them do not see the most important sight the city has to offer – the singing of «Roma, Roma, Roma» in the Stadio Olimpico before a match!

Of course, the group of 15 members from Roma Club Norvegia who recently travelled from Norway to the Eternal City were present in the Curva Sud for Roma-Palermo, with tickets arranged by AIRC. We all know how the match went, but it is always an incredible experience to visit the stadium, whether Roma win, lose or draw – especially when you do not live in Italy and it may only be possible to get to the Olimpico once or twice a season.

The members of the group arrived from various parts of Norway on April 13 and 14. Because Roma Club Norvegia has members in many different parts of Viking country (as well as Romans of Norwegian descent living in la citta piu bella), the club does not have an official sede, or headquarters. So when we gather in Rome we meet at The Surge, a bar run by Romanisti in Via Della Madonna dei Monti near the famous Totti mural in Rione Monti. We all met there for a wonderful evening (with many photos taken in front of the Totti mural) and presented the flag of Roma Club Norvegia to the bar’s owner, Edmondo Arcieri.

On Friday many of the Norvegesi took advantage of the free access to historical sites as part of the anniversary of the founding of Rome. We then met in Trastevere before going to the restaurant Il Ciak in Vicolo del Cinque, where we were joined by some Rome-based members of RCN and members of AIRC, including President Francesco Lotito. Member Number One of Roma Club Norvegia – il gialloroscio, John Arne Riise – was unable to join us because of the game the next day, but Jan Kvalheim – a former beach volleyball player who represented Norway at the 1996 and 2000 Olympics, who is now the agent of Riise – was present. We enjoyed a wonderful meal and afterwards Julius Berg Kaasin, the vice-president of Roma Club Norvegia, was presented with
an official AIRC plaque and flags and scarves by president Lotito. Then, when the bottles of grappa and limoncello were on the tables, we all waited with great expectation for the official announcement from Boston – a wonderful way to finish off a tremendous evening. Many thanks to AIRC for all their help and hard work – without it our trip would not have been half as enjoyable!

Saturday, of course, was the day of the match. We met at the obelisk outside the gates and made our way to the Curva Sud in plenty of time for the anthem and squad announcement. Things seemed to be going well when Totti scored his 204th goal in Serie A, but after that it was a poor performance.

On Sunday we were guests of Riise at Trigoria. We got to see the team train from afar – on the balcony of Centro Fulvio Bernardini above the swimming pool – but the mood was not so good after the loss to Palermo and the end of the dream of a place in the Champions League next season. Riise was very generous with his time, and we were able to ask him questions in the press conference room at Trigoria for more than an hour. One of the highlights was his story about how Totti is always playing practical jokes on the other team members, including De Rossi.

When asked about his favourite goal for Roma, Riise nominated the late winner against Juventus in January 2010 – but also said how proud he was to have scored against both Inter and Milan at the San Siro. He then posed for photographs and signed autographs. It was the second time Riise has taken members of RCN to Trigoria – the first after the loss to Juventus last season – and our thanks go to him and Jan Kvalheim for their help. Hopefully the next time we visit Trigoria it will be the day after a victory . . . in order to be guaranteed a win we may well have to plan our next trip to coincide with a derby against Lazio!